A Tribute to Bob Sullivan

A Tribute to Bob Sullivan 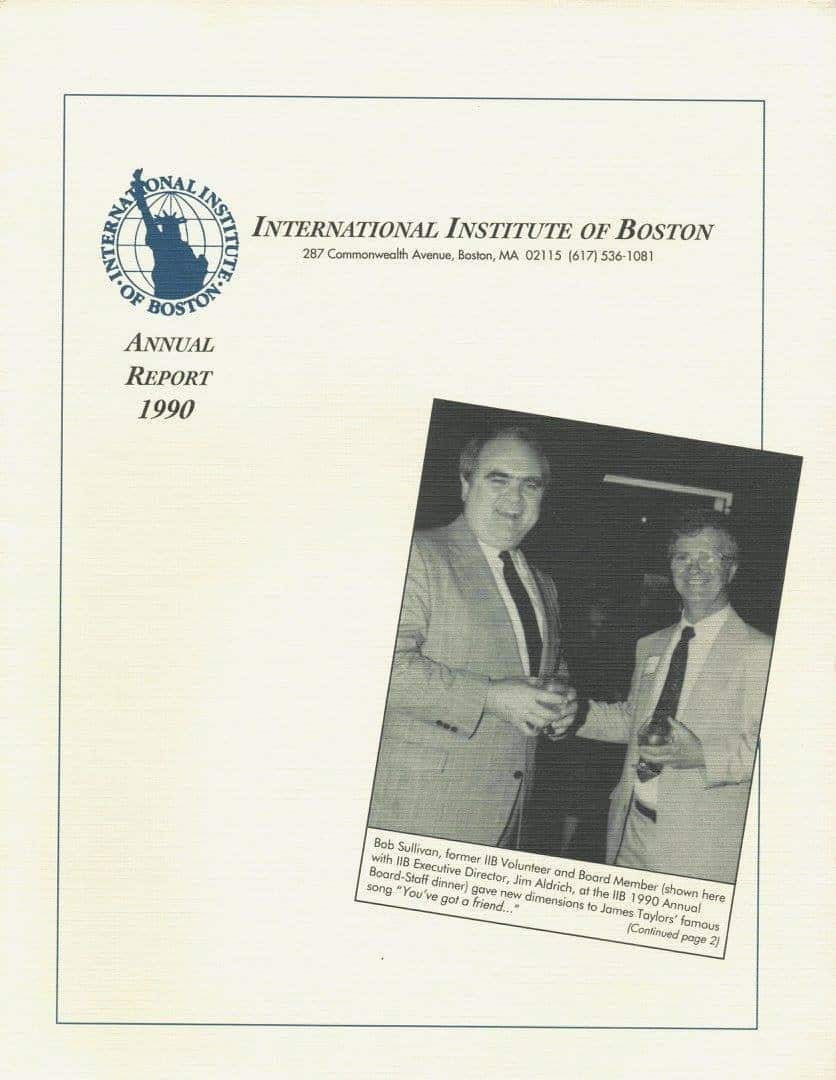 In celebration of the 100th anniversary of the founding of IINE, we are looking back at our organization’s history and recognizing some unique efforts made by the staff and volunteers who contributed their time and expertise to help improve the lives of immigrants and refugees.

In 1990, before the International Institute of Boston merged with locations in Lowell and Manchester, their newsletter included a tribute to Bob Sullivan, an outstanding volunteer, board member, and part of the Boston community who passed away unexpectedly that year when he was only 50 years old. His daughter, Suzanne McGillicuddy, stayed in touch with IINE and just recently shared some memories from her family’s involvement with our community.

She sent IINE a copy of the IIB’s 1990 Annual Report, which highlighted Bob’s championing of our mission and his interactions with many refugees and their families. He donated a computer to the International Institute, helped with English classes, and arranged trips for young people to fun activities like ball games, amusement parks, and his family’s rented summer cottage in Vermont.

His daughter, Suzanne, said: “Supporting refugees was a big part of his life. We always hosted international students but then once he got involved with IIB (back when it was called that), he just lit up and gained so much from supporting folks from all over the world who were the newest members of our community.”

Bob was most famous for his “World Picnics,” which he hosted at his home in Needham, MA, every year on the Fourth of July. Refugee families from all over the world who had settled in the Boston area came together to play games, barbecue on the grill, and enjoy time outside of the city.

“My father would get lists of ingredients for various recipes from people and go all over Boston to different ethnic markets to pick them up so people could cook something from their country at our house,” Suzanne said.

Fast forward to this summer, when Suzanne was thrilled to learn that IINE has a family of volunteers who have unknowingly continued her father’s legacy by welcoming refugee families to a summer party at their home. Just last month, the Traeger family in Sandown, NH hosted 60 refugee and immigrant families at their home in the country. This was the third outing of its kind at the Traegers, who welcomed the large group to enjoy the outdoors by hiking and fishing and then share a meal together.  We’d like to think Bob Sullivan would approve.

In the face of government policy that seeks daily to discourage our efforts, it is heartening to know that we have second-generation supporters like Suzanne and families like the Traegers who believe in welcoming newcomers and who are determined to make a difference in their own neighborhoods.

You can support the International Institute of New England in our second century of creating opportunities for refugees and immigrants by visiting: iine.org/donate.