Ten Minutes from Home, A World Away

Ten Minutes from Home, A World Away 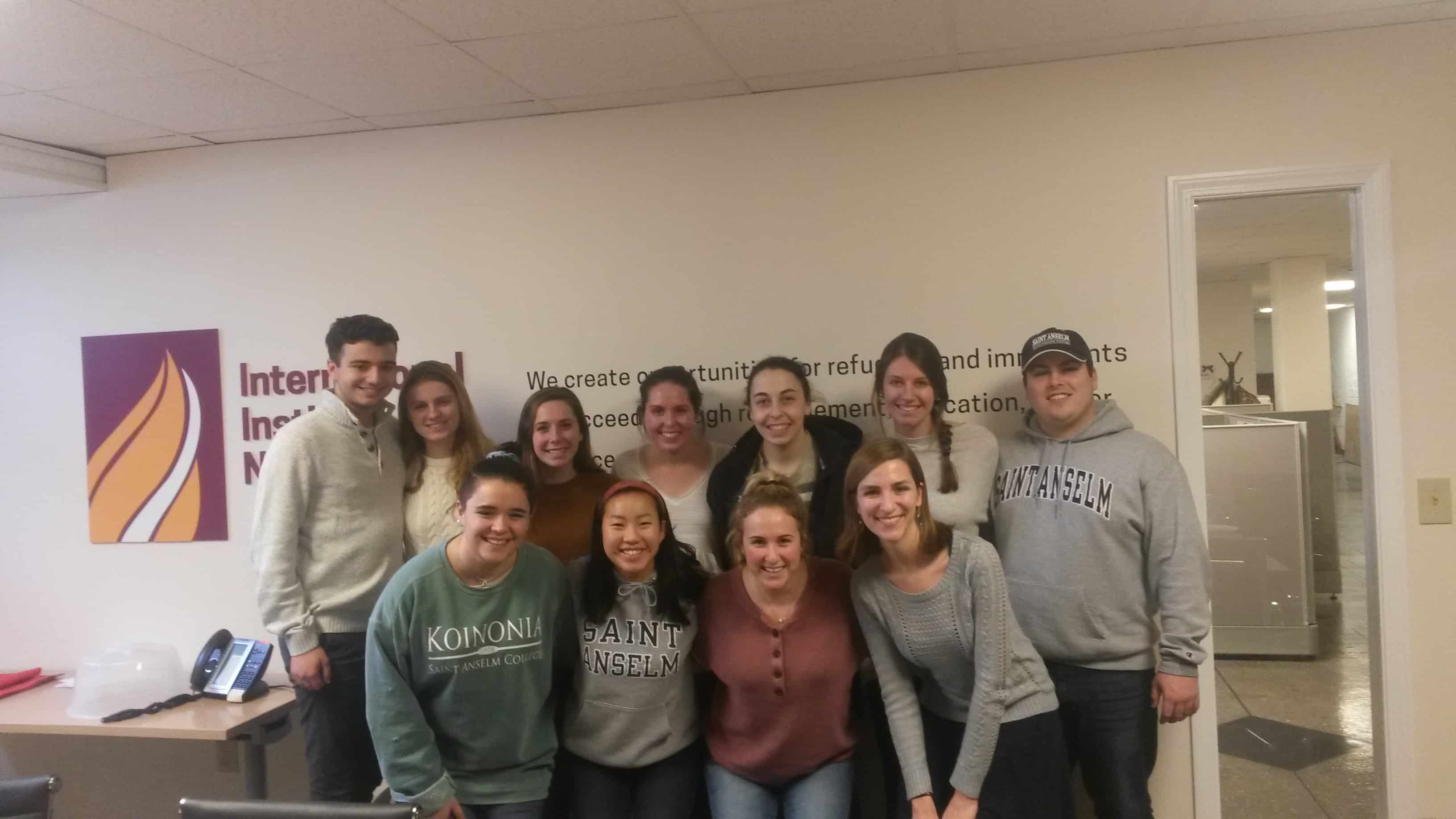 When Jordan, a senior at Saint Anselm College in Manchester, NH, signed up for a “Winter Break Community Service” trip through the college’s Campus Ministry office, she said she was surprised to learn her service assignment was not in a far-flung region of the country. It wasn’t even in a different state. Her placement was for… Manchester, NH.  As a student living in the city already, she was worried she might miss the cultural experiences of other students who would be traveling to different parts of the country. Despite her initial misgivings, she said she chose to keep an open mind.

“Little did I know that this ten-minute drive would feel worlds away from home,” she said.

For six days, Jordan worked alongside immigrants and refugees in Manchester as a volunteer at IINE. She was part of a 10-student team from St. Anselm’s that helped insulate the windows in twelve homes of recently resettled refugee families.  Her team also took part in an after-school program for immigrant children.

According to Jordan, however, the most daunting task of the service trip was leading a beginner-level class of English for Speakers of Other Languages (ESOL). Most of the adult students had been in the United States for only one month and spoke little or no English. She said she had many doubts about her own abilities, and questioned how she would communicate in spite of the language barrier, as well as whether or not she would be able to relate to the immigrant community.

Once in the classroom, Jordan said she quickly realized that she was learning much more than she was teaching. In spite of significant life transitions and the overwhelming challenges of learning the English language, her students demonstrated a kindness and compassion that she didn’t expect.

“Even when they repeatedly did not understand something, they smiled through their frustration,” she said. “My time spent in the classroom almost made me forget the reality of their situation. These people taught me more about life than any amount of English I could have taught them in those 90 minutes.”

Since 1980, Manchester has been one of New Hampshire’s refugee-resettlement sites as part of a program created by the Federal Refugee Act. Today, immigrants and refugees comprise more than 13 percent of the city’s population. The International Institute of New England provides an array of support services to help refugees and immigrants successfully transition into their new lives in the United States. Services include job training, English language classes, and legal aid services.

Riley Casey, a campus minister at Saint Anselm College, said volunteering with IINE can be a transformational experience for students.

“Partnering with IINE allows our students to go beyond our campus to see a new perspective of Manchester and realize the home of their college is also the home to so many individuals and families from different backgrounds,” she said. “When [they] take the time to meet residents and hear their stories, they often return to campus with new insight into their own lives.”

IINE’s Community Relations Manager in Manchester is Shannon St. Pierre. She said the team of students from St. Anselm’s had a significant impact on the IINE clients they engaged.

“We are so grateful to the students who chose to share their vacation time helping others,” Shannon said. “Our students and clients really connected with the St. Anselm’s team, and I think it was a mutually beneficial program for everyone!”

For Jordan, volunteering with IINE was an experience that changed how she viewed herself and the world around her.

“My [only] regret was that I initially doubted myself – that I would not succeed in communicating with the refugee/immigrant population, working around language barriers, and relating to kids that did not grow up in the way I was fortunate enough to,” she said.  “I am forever grateful for that short ten minute drive down the road, because it introduced me to a community that I did not know existed in Manchester that has changed my life.”

To find out more about how you can volunteer with the International Institute, please join us at one of our Volunteer Informational Sessions, which are held from 6:00 PM – 7:00 PM on the last Monday of each month in Manchester, NH, and quarterly in Boston, MA and Lowell, MA.

A full schedule of Volunteer Information Sessions is online: https://www.iine.org/volunteer