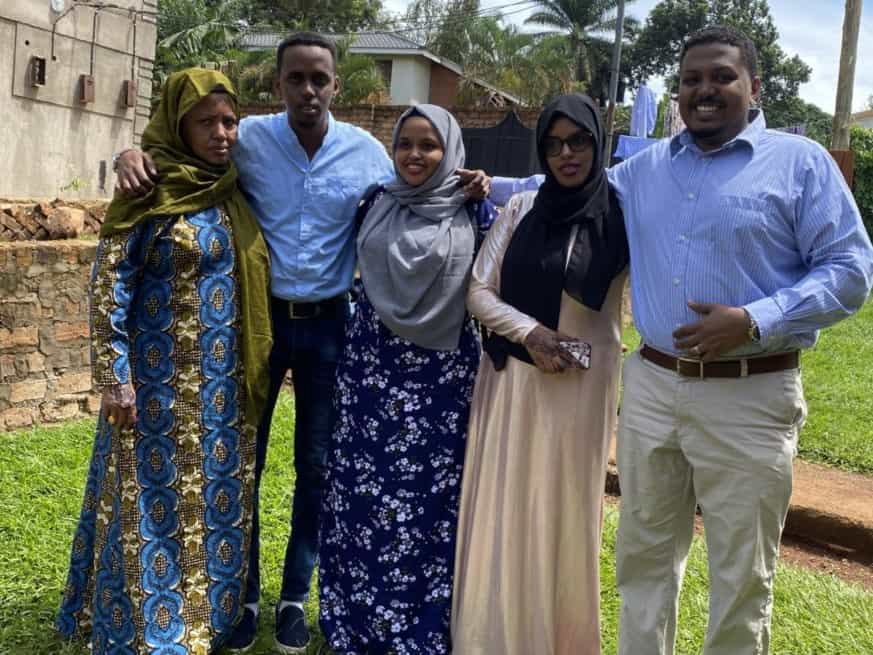 Yusuf Abdi is a Case Specialist at IINE in Lowell, and a former refugee. For the past 12 years, he has been trying to reunite with his mother and siblings. In March, Yusuf flew to Uganda (wearing a mask for the whole flight!) to collect his mother who he hadn’t seen in over a decade, and finally bring her to the United States to live with him and his young family.  Yusuf and  his mom have arrived safe and sound in Lowell, where she is meeting her grand kids for the first time.

My father was a Somali army general, a political science professor at Somali National University, and a civil rights advocate. My mom was a businesswoman who owned beauty salons in the capital city of Mogadishu.

I grew up during the Somali Civil War, and witnessed the period from December 1991 to March 1992, when Somalia was torn apart by clan-based warfare. During that time, warring factions plundered the remnants of the state structure and fought for control of rural and urban assets. Four months of fighting in Mogadishu killed an estimated 25,000 people in 1991 and 1992. One and a half million people fled the country, and at least 2 million were internally displaced.

One of the events I witnessed during my school time in 1997 was when militia attacked our school while class was in session. They raided everything, including chairs and syllabus books. They presumably took the books to sell to shopkeepers so that the pages could be used to make teabags and wrap sugar. The following day I returned to class and found that they even took the aluminum roof. Only the blackboard remained nailed to the wall.

I studied at Mogadishu University from 1999 to 2003 and received my degree in economics. The security situation was precarious at that time and even the daily commute to school was risky. Resources were limited, and it was nearly impossible to borrow books from the library.

In 2004 I had to leave Somalia after the assassination of my father by the fundamentalist terrorist group Al Shabab. My father was an army general, peace promoter, and civil society advocate. Since he had openly supported the call for international peacekeepers, he was assassinated. After his death my family split up for safety reasons, with no way of finding each other. That was the start of the next phase of my life – as a refugee. 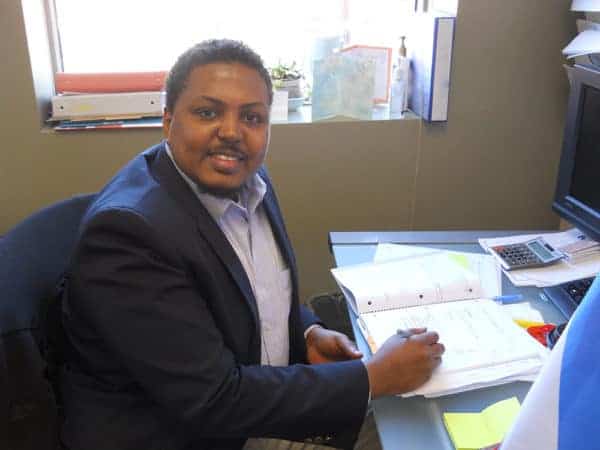 I arrived in the United States in 2008, to Burlington Vermont. Since 2009, I have been working as an Employment Counselor helping new refugees find jobs. My role at the International Institute of New England in Lowell allows me to link newly arrived refugees to local business and community partners.

In my career I have helped more than 500 individuals to become self-sufficient when they arrive in America.

I am currently married and have a three year-old daughter and a baby son. My spouse and I are part-time students and rotate taking care of our children. I am pursuing a Master’s degree in Peace and Conflict Studies at the University of Massachusetts Lowell. I have a full-time job, and my spouse works part-time at Lawrence General Hospital. I am responsible for financially supporting my extended family who are currently living in Tanzania. In June 2014 my brother came to the United States and lives with me in Lowell.

I am hoping one day all my siblings, my mother, and I will reunite to live together in the United States and that they will have the chance to experience the peace I have here.