The International Institute’s engagement with “clients” often spans many years, beginning when we welcome new arrivals at the airport and continuing through intensive case management, English classes, job training and placement, and legal services. We are privileged to be part of our clients’ lives at many different points during their integration journeys.

Not long ago, we got to know a young man from El Salvador named Francisco. His soft-spoken and thoughtful demeanor gives no hint to the intimidation and violence he endured in his home country. In El Salvador, Francisco dreamed of attending college and tried to focus on his high school classes, but found himself targeted by local gangs. 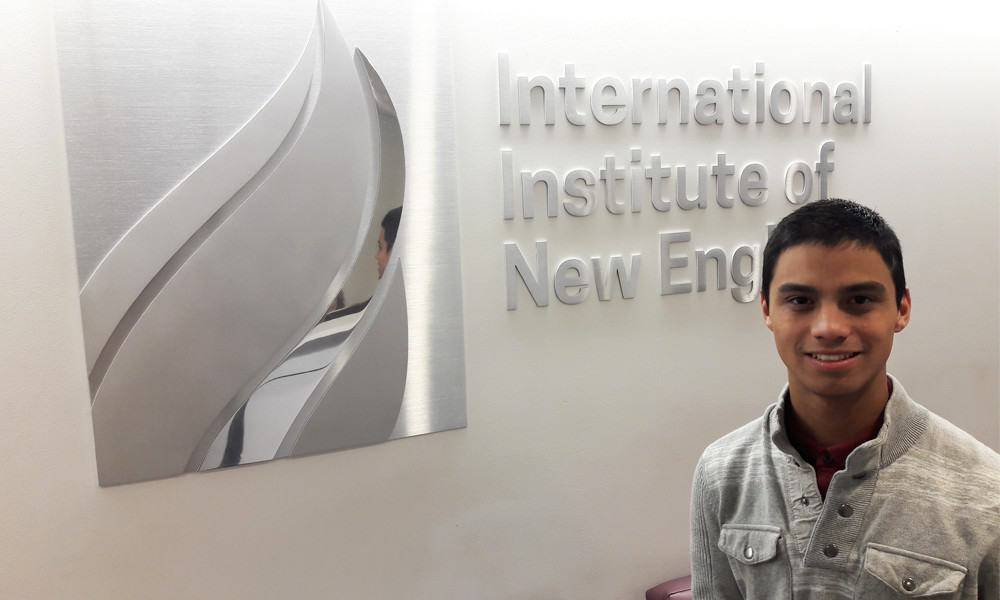 “I studied, but it was very hard for me,” Francisco said. “I was being assaulted every day. I was constantly being threatened —- they demanded that my family pay them money.”

After gang members attempted to kidnap him, Francisco sought help from his father, who was living in Massachusetts. Like all Central American families we help to reunify, Francisco and his father saw a move to the U.S. as their only hope for Francisco’s safety and security. His dad immediately applied to have his son admitted to the United States for refugee resettlement.

In February 2017, Francisco was relieved to be notified that his application had been approved. Given 24 hours’ notice, he flew to the U.S. the next day, with the International Institute handling his case and helping him settle with his father north of Boston.

“The hardest part of being an immigrant is leaving your family, everything you know,” Francisco said. “I have to keep moving, but without forgetting what I left behind.”

The International Institute’s staff enrolled Francisco in our English classes and employment services program, and helped him secure his first job in the U.S. We provided cultural orientation, and helped him strategize about how to achieve his long-term goals.

Francisco didn’t speak a word of English when he arrived in the U.S., but he never gave up on his dream of studying graphic design in college. In addition to providing him with English instruction, IINE helped him enroll in a nearby college readiness program. Francisco recently passed the language requirement exam and is excited to start attending Bunker Hill Community College.

Over this last year, IINE’s Legal Immigration Forms Service team helped Francisco apply for a green card and guided him through the complex process of becoming a permanent U.S. resident. Francisco received his green card in October.

“I am very thankful to the International Institute,” Francisco said, “because from the very beginning when I arrived in this country, they supported me.”

Emma Lazarus’s poem at the base of the Statue of Liberty implores us as a nation to open our doors to those seeking refuge on our borders: “Send these, the homeless, tempest-tost to me, I lift my lamp beside the golden door!” IINE has been putting these words into action since 1918, serving as a guiding light for tens of thousands of New Americans.

“This year, being in the United States, I’ve learned a lot,” Francisco explained. “I learned how to live my life without being frightened of the people around me, thinking that they will hurt me. Because that’s how I lived in my country. I am very happy because I received a lot of help in the United States that I could never have imagined before.”